Adapted village infrastructure, ICT tools and branding to become an ‘accessible village’ for people with disabilities as an engine for cultural, social and economic growth.

This solution involves physically and digitally adapting a rural village to make it more accessible and welcoming to an increased diversity of visitors, with particular reference to people with different types of physical disabilities (hard of hearing people, blind people, people with motor disabilities), in order to attract more tourists and develop a diversity and welcoming culture at local level.

Physical infrastructure modifications can include:

The actions create a culture of inclusion and tolerance, whilst creating new job opportunities for local youth, focusing on a specific type of tourism and promoting better quality of public spaces and ICT services for all the residents.

The physical modifications can be supported with promotional activities and branding as ‘an accessible village’ to encourage tourism based on the new opportunities provided to people with disabilities and their families in a rural setting.

The solution is smart because it takes a socially focused approach to the generation of new economic opportunities in a rural setting, taking advantage where relevant of modern technologies. It aims both to meet the social needs of a diverse range of people and promote the economic and social growth of the village, all while creating new services which are also useful for the residents.

The solution demonstrates the following forms of innovation:

• Digital innovation – it uses ICT for testing innovative use of public spaces and promotion of local attractions for people with disabilities, for example through sensors which send location-specific information to visitors’ smartphones

• Social innovation – it both promotes and builds upon a strong concept of social inclusivity, both to members of the village community and to any external visitor.

• Business innovation – the solution aims to take advantage of the economic opportunities generated by a new form of tourism aimed at showcasing the ability to welcome people with a diversity of physical needs. 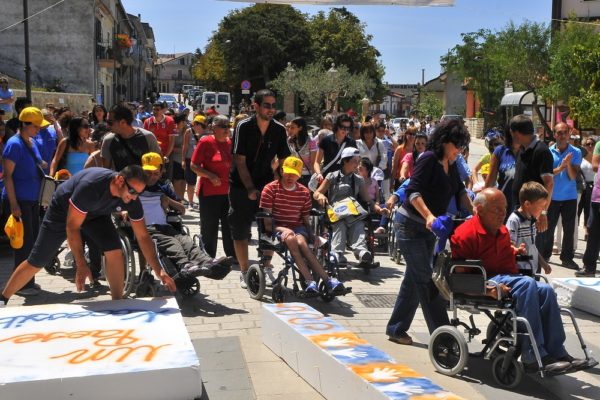 Monteverde is a village located in Southern Italy at the border between Campania, Apulia and Basilicata regions. Monteverde is characterised by the typical problems of inner areas in Italy: decreasing birth rate, lack of services and employment opportunities, population decrease in particular by local youth fleeing the village to live in bigger towns or in Northern Italy.

Cultural and economic exchange with the rest of the region declined over the years, also due to the distance with the provincial capital (Avellino, located 110 kilometres away) and the regional capital (Naples, 140 kilometres): the poor mobility infrastructure connecting Monteverde with bigger towns and cities is still considered as one of the main problems affecting the quality of life of the residents.

Nevertheless, Monteverde benefitted from several advantages based on its cultural and built heritage presenting a strong touristic offer. It was already recognised as one of the ‘Most Beautiful Villages of Italy’ (Borghi Più Belli d’Italia). It aimed to build on this potentially by improving its strategies of territorial marketing to attract more visitors, aiming at the niche group of tourists represented by people with disabilities and their families.

• The Municipality of Monteverde

2. After having mapped historical, architectural and environmental attractions in collaboration with local NGOs, the Municipality launched the project “An Accessible Village”, co-designed with residents, on the creation of a structural model on making the village more accessible.

3. The presentation of the project to the Regional authority was particularly challenging at bureaucratic level, particularly for the level of details to be followed for very specific actions such as the ones included in the project facing different types of disabilities. But, thankfully, Campania Region quickly recognised its added value and funded the realisation of the actions in the framework of the EU-funded (ERDF) Regional Operational Programmes (POR) 2007-2013.

5. The construction started with the creation of an accessible outdoor path, then with the removal of architectural barriers in the centre of the village and the installation of sensors and wi-fi hotpots along the main tourism attractions.

6. Further collaborations established with NGOs focusing on different types of disabilities and the Health District managing Local Social Plan (the local planning tool for welfare services) contributed to improve the project, that was funded again in the framework of the EU-funded (ERDF) regional planning (POR) for the programming period 2014-2020.

• Monteverde was able to invest 2.7 million EUR + VAT in the physical infrastructure modifications, thanks to Regional and ERDF support.

• It was also able to invest a further 750 000 EUR + VAT in related services and ICT infrastructure.

• A knowledgeable initiator is needed to raise awareness of accessibility issues and inclusivity of people with disabilities.

• A solid political and technical leadership is needed in the Municipality, as the entity in charge of writing the project and managing the whole bidding process and the work of contractors. They also need to be able to mediate among different stakeholders and attract national actors to raise the level of the actions.

• A pool of engineers and technicians need to be created, for instance in the form of a temporary consortium of professionals, in order to support the local authority in the direction of the construction work.

• An hosting structure (municipal hotel, to be managed by a local cooperative)