Tomaszyn is a small village located in Warmia and Mazury. It consists of ten households and a cooperative. The region is classified as the Green Lungs of Poland and has the lowest population density in the country. There are eight landscape parks in the voivodeship, which shelter natural phenomena on a European scale. It is said to be the Land of a Thousand Lakes.

Tomaszyn has been a farming and prosperous village for many centuries, first written information dating to 1410. However, most of the village buildings were destroyed during World War 2.

The population shrunk to four farms and several vacationers reaching the lowest point in 2017. A year later, the Cooperative Ostoja Natury was formed and settled in Tomaszyn. Ostoja Natury is the ‘agricultural ecosystem of tomorrow’, constituting the reference farm model of the smart village. This organic farm is a closed circuit in which waste is fuel, it produces energy, enables year-round food production, and works more efficiently, ensuring higher yields.

While creating Ostoja Natury, we were inspired by nature’s already existing solutions. Just as in a prehistoric forest – the circuit is everything, waste is non-existent. Our goal is to create an ecosystem designed to provide economic efficiency with minimal influence on the environment. Methods tested over the ages, such as crop rotation, raised seedbeds, home recipes, and many more, are refreshed and implemented, using technological innovations of modern times.

Our cooperative had developed and started the implementation of several strategies in Tomaszyn:

Tomaszyn’s Ostoja Natury introduces its goals, ideas and solutions in the first episode of ‘Regenerative Agriculture in the making’ – watch this short video on the cooperative’s experiences and journey towards regenerative agriculture.

Inspired by nature’s already existing solutions, Ostoja Natury’s new series will showcase methods tested over the ages, such as crop rotation, raised seedbeds, moon wood, hemp, refreshed and implemented using contemporary technological innovations. It is a conservation and rehabilitation approach to food and farming systems that produces high-quality food while using methods that are in harmony with nature. 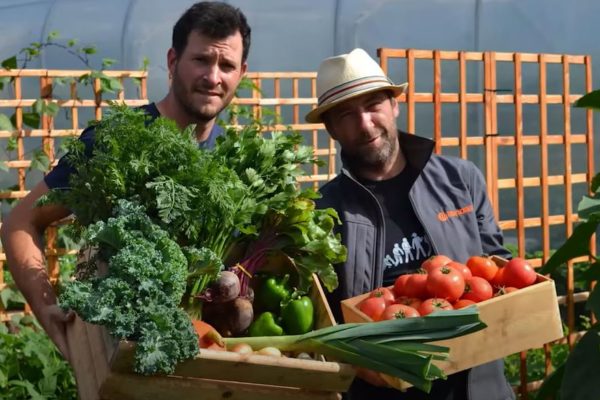 Tomaszyn: on the path of sustainability

Ostoja Natury launches construction of an eco-friendly storage space for vegetables, intended to be built from hemp and lime bricks, recently shipped from Belgium. The Cooperative plans on using other natural materials to isolate the 120 m2 storage space.

The hemp and lime bricks, 10x20x40 cm big, are produced through a special manufacturing process, involving cold air, which results in the two materials being pressed together to form a brick. 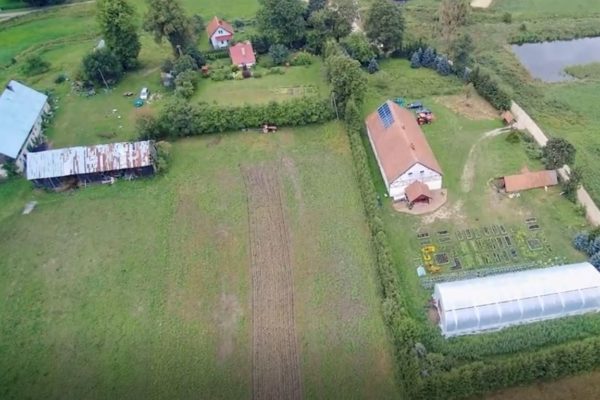 Complementing the Tomaszyn BioTech conference of 12 September, a virtual visit of the village (13 September) and a panel discussion on support for smart villages (14 September) will form the first regional workshop of the Smart Rural 21 project – see the full programme.

The virtual visit will be livestreamed on YouTube and no prior registration is needed. The panel discussion is mainly intended for policy-makers and individuals, involved in shaping Smart Village policies, participation is subject to registration. 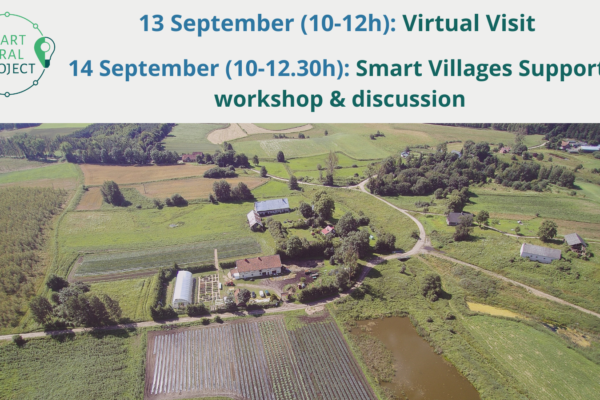 The second edition of the international BioTech conference will take place virtually in Tomaszyn on 12 September and address a wide range of topics, such as the future of farming, the EU Green Deal, 21st century agriculture, organic farming, Smart Rural 21 villages.

The event will be livestreamed on YouTube and no prior registration is needed – see the full programme. 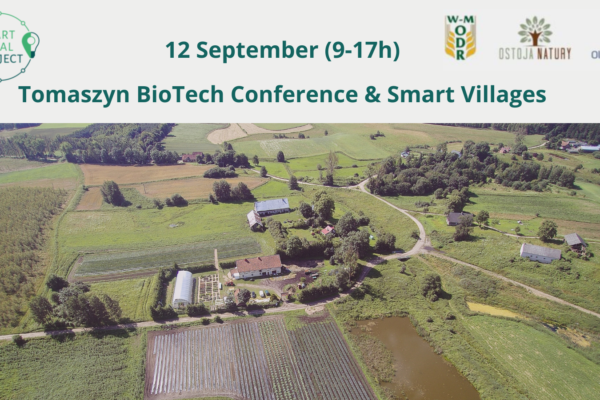 Find out how regenerative agriculture and smart ecological production methods are implemented in the Ostoja Natury cooperative in Tomaszyn – Piotr Ostaszewski, Chief Executive Officer of the cooperative, tells participants of the Smart Rural 21 project’s Communities Café in July 2021.

Discover also how the cooperative’s BIO HUB – a ‘from-farm-to-fork’ short-chain distribution strategy – was realised in the Olsztynek, Warmia and Mazury regions.

The Ostoja Natury cooperative was formed and set up in Tomaszyn with the objective of becoming the driving force of change of the village. 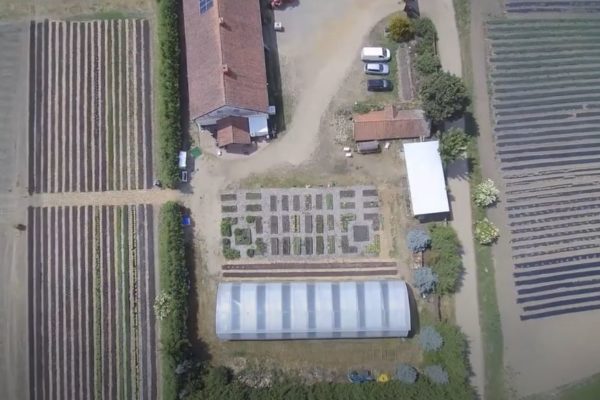 Tomaszyn has been experimenting with various sustainable and smart agricultural production methods, as well as has been exploring a eco-building construction. Tomaszy plans to develop Regenerative Plans for the village including landscape plan, animal regenerative grazing plan, localisation of agro-forest, crop and field regenerative production plan and educational path. National and international specialist in earthship projects, regenerative grazing, agroforestry and passive greenhouse construction visited the coopeartion to provide consultancy and share their knowledge in the relevant fields of expertee in the frame of various workshops organized in Ostoja Natury for the members of the cooperation and residents of Tomaszyn between 29/04/2022 – 06/05/2022 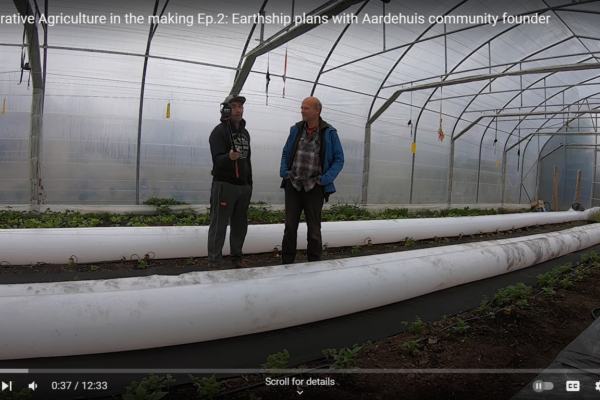 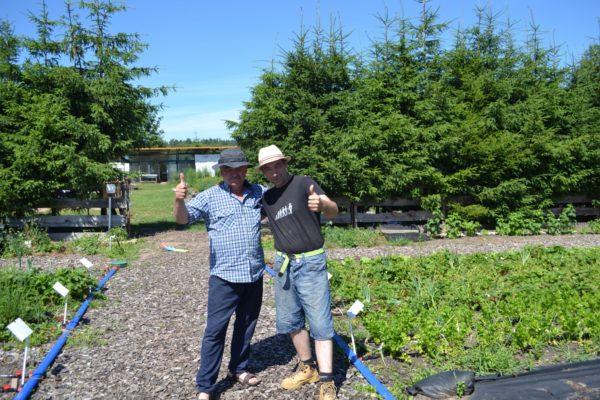 Planning works started with the visit of an agro forest specialist that took place on 11/04/2022. The specialist conducted land assessment in the territory of Ostoja Natury in order to plan the location of fruit orchard plantings at the "Ostoja Natury" Farm. As a result of his consultation work the optimal location of the fruit orchard was chosen, the next step will be planting, row spacing and inter-row spacing planning 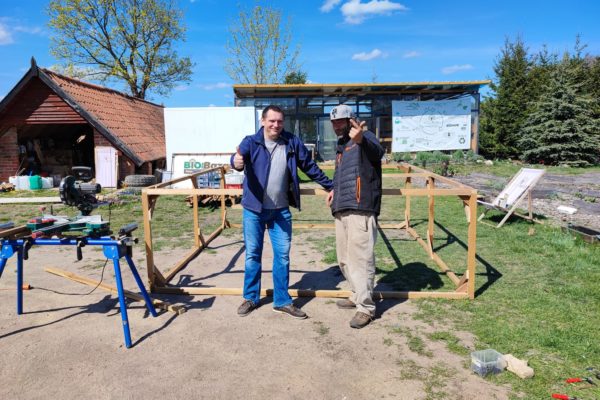 Expert in regenerative farming held workshops and provided consultancy on regenerative gazing to the members of Ostoja Natury and current farmers of cattle herds in Tomaszyn in the period of 29/04/2022 – 06/05/2022. During the sessions the surrounding areas were visited to check the current pasture situation and to verify the state of biodiversity, available sources of water, shades and trees for animals. Ground elevation , possible paths for transporting cattle and food took place. During the process area for field cattle grazing, winter bale gazing was selected. Plans for future orchard with egg-mobile and hens operation and chicken tractors operation were made and a chicken tractor was built 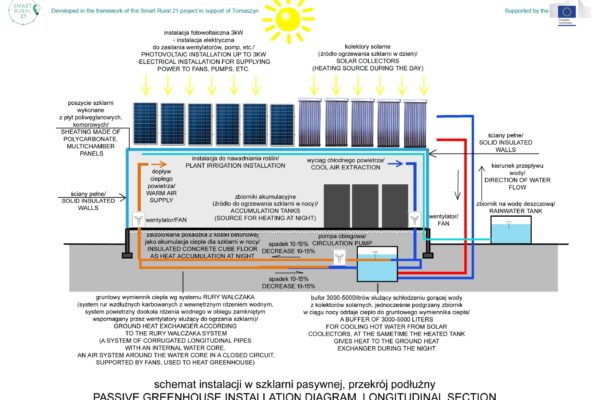 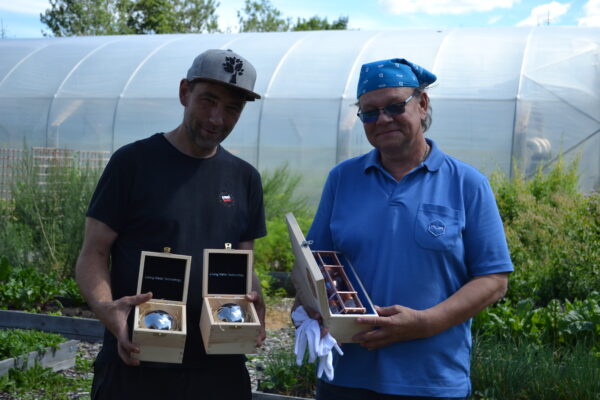 Step 5/5 : Workshop on “Living water” technology was organised and one year trial period to be run

"Living water" is a technology that can provide solution for an easy and inexpensive way of taking care of brown water by restoring the natural structure of water by changing the dead water into living water. A one day workshop was organised in Ostoja Natury on the "Living water technology" with the objective to learn about the optimization of water usage in crops irrigation true right water programming and to understan water behavior in natural ecosystem. "Living water technology" will be tested and experiement will be run during over a one year trial period in Ostoya Natury

Paul Hendriksen, Earthship specialist, visited Ostoja Natury in April 2022. His project ‘Aardehuis’ (Earthhouse: https://www.aardehuis.nl/index.php/en/) in the Dutch village of Olst is unique in Europe: it is a completely self-sufficient eco-home using as many natural, re-used and upcycled building materials as possible. The Ostoja Natury Cooperative in Tomaszyn is interested in the Earthship building concept to realise a multifunctional visitor centre and some houses. They have a special interest in the Earthship project in Olst because of a few special features that are not found in this combination elsewhere in the world. The focus of Mr. Hendriksen’s visit was on the implementation of the Tomaszyn strategy in terms of realising a visitor centre and housing, in a way that best reflects the Ostoja Natury philosophy in terms of building style and construction.

During the 6th Smart Rural Communities Café, Piotr Ostaszewski from Tomaszyn talks about how regenerative agriculture and smart ecological production methods implemented in Ostoja Natury – their cooperative formed and settled in Tomaszyn – to become the driving force of change of their village. He explains how their BIO HUB – from farm to fork short chain distribution strategy – was carried out in Olsztynek, Warmia and Mazury Region.

A brief overview of the 2021 agro-tech event featuring practical and theoretical workshops dedicated to the food supply chain and regenerative agriculture.

The event discussed topics such as the future of agriculture, regenerative agriculture, support for innovation in Poland and the EU. It featured presentations of the Smart Rural 21 project villages.

Regenerative Agriculture in the making (episode 1)

Tomaszyn’s Ostoja Natury introduces its goals, ideas and solutions in this first episode of ‘Regenerative Agriculture in the making’ – watch this short video on the cooperative’s experiences and journey towards regenerative agriculture.

Discover the Ostoja Natury Cooperative, set up in 2019 in Tomaszyn. It consists of a group of producers creating high-quality food, distributed directly to customers through a sales platform that does not require intermediaries. This organic farm is a closed circuit in which waste is a fuel, and farm produces energy, enables year-round food production and works more efficiently, ensuring higher yields. Watch this short documentary – ‘Farm Gear on the trail of innovation’ – showcasing the winners of the ‘Smart Village’ competition, including the Ostoja Natury Cooperative, run by the Polish Ministry of Agriculture and the Polish Academy of Sciences.