CéléWatt – a Solar Park on Trees

A community solar park occupying less than one hectare of land to allow energy production at village scale. It is halfway between an individual installation and a ground-based power plant.

Solar panels are installed on a raw-wood structure sustainably sourced from surrounding woods. The solar park does not require the construction of a technical building and does not generate any nuisance (no noise, odour or radiation).

The governance of the solar park is community based and citizen-led, combining crowdfunding with cooperative management.

Whilst it requires a reasonable initial investment (around €220,000), it delivers long-term savings with regards to energy costs.

The smart dimensions of a community solar park built on local trees are numerous. It demonstrates an effective small-scale solution for delivering renewable energy for the benefit of the local community, including long-term cost savings, reduced pollution and a contribution to the international effort against climate change.

It is also possible to combine the solar park with local biodiversity initiatives – such as using sheep to restore grassland within the solar park territory.

The project can be seen as innovating in three ways:

• Social innovation: Its governance system is community based and citizen-led, combining crowdfunding with cooperative management. Furthermore, by producing electricity equivalent to their electricity usage, residents are encouraged to think about their lifestyle and look for ways to save energy

• Technological innovation: It is a unique example of a solar plant constructed on untreated and unprocessed wooden supports

• Business innovation: By using short supply chains (local timber) and depending on local people, both the costs and the solar park’s ecological footprint are minimised.

“Replacing the galvanised steel supports of the solar park with raw wood collected in the neighbourhood drastically improves our ecological footprint and adds a local dimension to the project,” explains Bertrand Delpeuch, the cooperative chairperson. 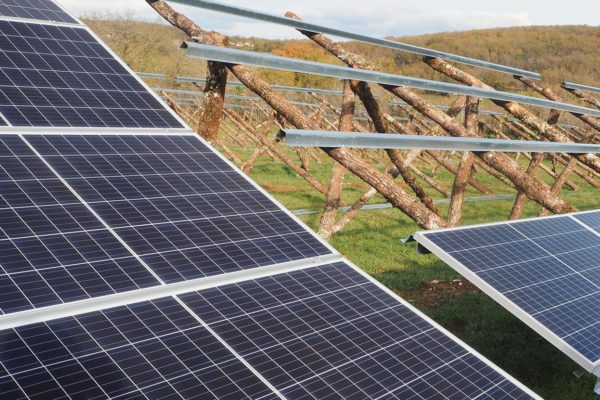 The unspoiled, authentic nature of the Célé valley is a key feature of the area. Its preserved environment is a unique selling point for ecotourism and organic farming. As with many remote rural areas in France, its population is slowly increasing in the last 20 years, as young eco-friendly families and retired people move into the area.

“Our original idea was to promote local employment and natural resources,” says Delpeuch. “As we had no room to manoeuvre on the origin of our solar panels, which are delivered to us from China by the company Talesun, we decided to focus on the poles.”

The area is indeed rich in oak forests. This straight and solid wood, about 15cm in diameter, is traditionally used as a support (‘bouchot’ in French) in mussel farming in the nearby county of Charente-Maritime. “Replacing the galvanised steel supports of the solar park with raw wood from forests about 30km from here improves our environmental performance,” Delpeuch explains.

The launch and creation of the community solar park was managed by a group of a dozen volunteers living in the area that became administrators of the CéléWatt cooperative. The creative brain behind it is CéléWatt chairperson Bertrand Delpeuch, a retiree and agronomist by training. He has managed several programmes within the European Commission, including Life-Nature and Comenius. Engaged in local civil society activities, he brings to the project his ability to inspire and network. “When we started to imagine these solar parks, there were only five of us,” he says. “We wanted to tackle the energy issue, to become more resilient and self-sufficient at village level along the Célé valley.”

CéléWatt is a public interest cooperative society (in French: Société Coopérative d'Intérêt Collectif - Scic SAS) that helps generating community power. It brings together volunteers willing to engage in a local, ecological and citizen led project in the Célé valley. CéléWatt has 480 individual members as of October 2020 of which two third are local people.

The objective of the cooperative is to produce and sell:

• Energy from solar and other renewable sources;

• Services for the substitution of nuclear and fossil fuels by renewable energy;

• Services for the reduction of energy consumption.

Inspired by several experiments, notably in the Gard and Aude regions, CéléWatt developed its first solar park in 2018, in Brengues (South West France) in cooperation with the PV company Mecojit. The plan is to develop a cluster of citizen-owned solar parks along the valley of the Célé river.

In May 2017, a first plot was chosen in Brengues, the connection with power operators was made and the call for subscriptions was launched. During winter 2017-2018, volunteers helped to clear the site and fence the area. The engineering company took three months to build the park that was officially inaugurated in June 2018.

The second solar park in Carayac is the first in Europe mounted on untreated wood (Quercus pubescens). The lease was signed with the municipality at the beginning of 2020. The prior declaration of works was filed in March and validated by the authorities at the end of April.

In June 2020, the purchase contract for the production of electricity was signed with Enercoop, a renewable energy utility operating at national level.

The staking of the panel connection points was carried out at the end of June. Tests of the new wooden supports, designed by Mécojit, took place in July. Two local companies installed the fences and earthworks necessary for accessing the park. A 60 m³ flexible tank was also installed at the request of the Departmental Fire and Rescue Service.

The oak trees for the panel frames were cut down during September and brought to the site for assembly in October. This wood was chosen because it is indigenous and is very weather resistant. Although there is a minimal risk of the timber being infected by a fungus, sections can be easily replaced. Each timber frame is attached to a steel mounting bracket which acts as a foot to prevent the wood touching the ground. The stability of the panels will be visually checked every three years and a general overhaul will be carried out during the ten-year maintenance.

The main costs associated with constructing the Carayac solar park include:

• Oak support structures for the panels

All the running costs – coordination and administration – are delivered pro bono by the cooperative team of local retirees.

All in all, around 30 people have been directly involved, either pro bono or through conventional working arrangements covering land management, renewable energy engineering, legal services and communications tasks.

You need a plot of south-facing land (less than 1 ha) that is not too far from a medium-voltage electric line.

The panels are mounted on locally sourced timber derived from around 600 young oak trees (which were about 15cm in diameter).