The Citizen-run Bus Service is an on-demand transport service, using voluntary local drivers and  operated by a non-profit association – called a citizens’ bus association - made up of local stakeholders, including local mayors, interested citizens, the district government, and the regional public transport operator.

The association purchases the required vehicles – typically including minibus or people-carrier size vehicles to cater for larger groups and also favouring electric vehicles where possible. The association also recruits local drivers, who make themselves available on a voluntary basis and live in the villages so that they can really serve spontaneously when called. Although under no obligation to be available at any given time, the volunteer drivers can still be rewarded financially through an honorary flat rate or sometimes employed in a ‘mini-job’ scheme.

Local people can book a journey using a telephone booking service or through an app. Journeys can be booked for door-to-door trips between any locations in the region as well as for making connections with the standard public transport network – particularly for onward travel to major cities. Many passengers are thus travelling intermodally, as they use both the on-demand service and the main public transport network for their journey.

People booking the journey do not have to pay. The costs are born by the citizen bus association. However, it is up to the users to give a voluntary donation for a ride, which some people tend to do.

The service can connect even the most remote villages to the public transport network, or between each other, enabling potentially isolated users to have improved access to good, services and social connections. This includes access to shops, leisure facilities and public services/administration – as well as with friends and relatives living in other villages.

This initiative is smart because: 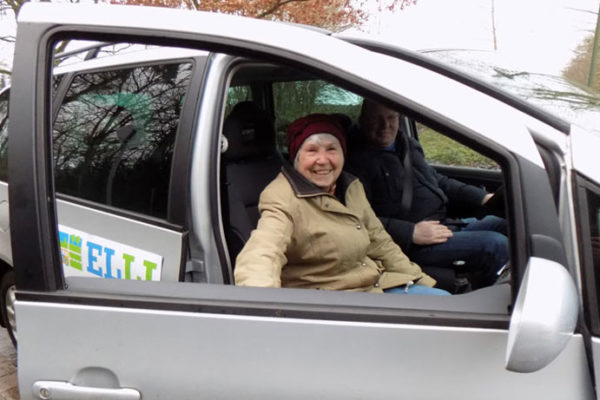 The district of Röbel-Müritz is in the so called Elde area (the area of the headwaters of the Elde River)  in the south-west of the Mecklenburg Lake District in Mecklenburg-Western Pomerania. Located about halfway between Berlin and the German Baltic coast, it covers an area of 570 km². A total of 18 smaller municipalities and the town of Röbel/Müritz belong to the district.

There are three public express bus lines serving the Elde-area and also two railway stations - one located in Waren and another one in Wittstock – allowing onward travel to large cities such as Rostock, Hamburg and Berlin. But these stations are not well connected to many of the villages in the region. In view of the low capacity utilisation of the public bus system, it is not economically feasible to provide all villages in the region with a public transport service beyond an existing school bus scheme.

Therefore, most residents rely on the private car as the main means of transport. Those who cannot easily use this means of transport, such as many older people not owning a car or younger people without a driving licence, are significantly limited in their mobility. This has a negative impact on the quality of life in the disconnected villages and, not least, makes them unattractive for young families with children to move in.

Commecrially offered taxis services are too expensive to rely on them on a more frequent basis and online ride-hailing apps are restricted in Germany.  In addition, the heavy reliance on private transport has negative environmental effects. A solution was sought on how to reduce the dependency on private transport despite an increasingly thinned out public transport offer.

• Personnel costs for experts involved in the service development process.

• Acquisition costs for a mobile app.

Ongoing costs: EUR 25 000 per year, including the investment /depreciation costs for the cars.

• Interested citizens and mayors of participating villages to manage and run the service – through a citizen bus association.