Community-run co-working is a public operator model for rural co-working spaces run by a rural municipality. The services are still fee-based, with users expected to pay for access to modern workspaces and certain related services. However, in contrast to purely commercially driven operator models, the model does not expect to be profit making – especially at the beginning.

The community-run dimension means that rather than simply seeking to generate income from users, the co-working space has a clear focus on supporting local people. Community-run co-working thus involves activities to promote stronger networking of local people and businesses and the establishment of new forms of cooperation and new economic activities in the community. Various events are organised to attract potential users and strengthen the ties of the existing user community.

These events and services are organised through a physical space providing the typical services of a modern co-working environment, including workrooms, workstations, meeting rooms, printers, smartboards, video conferencing technology and kitchen facilities. Services can be offered through packages ranging from short-term ‘drop in’ access to weekly or monthly subscriptions. The solution benefits from the use of standard software for managing the co-working space, including invoicing, booking and statistical analyses.

Community co-working thus aims to reduce commuter flows to the nearby cities, to make the local rural community more attractive as a place to live and generate new local economic activities.

The initiative is smart because: 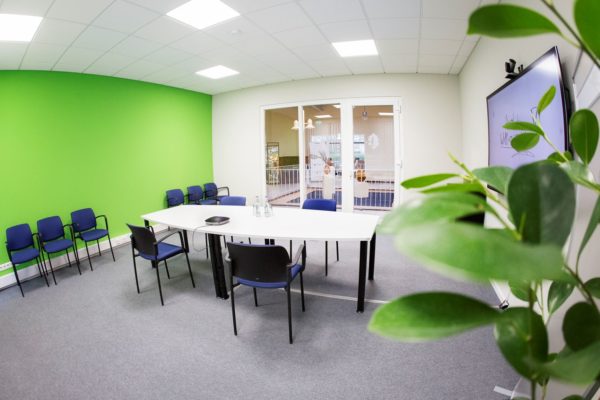 Gettorf is a rural municipality located half-way between two larger cities in the northern German state of Schleswig-Holstein – between Hamburg and the border with Denmark in the very north of Germany. Local life is characterised by daily employment-related commuting to the surrounding towns and by out-migration trends among the younger population. Ways were sought to increase the attractiveness of Gettorf as a place of residence and as a business location.

The idea emerged from a project by the Heinrich Böll Foundation Schleswig-Holstein, which toured northern Germany with a pop-up co-working space. The local council wanted to take advantage of the opportunities generally provided by the co-working space concept and allocated staff to adapt the general concept to local conditions. Other local stake holders were involved right from the beginning.

• Renovation of the premises and furnishing

• Software licenses: about EUR 500 per year

• Operation and maintenance of the internet connection / technical equipment: about EUR 1.500 per year

• A staff member of the municipal administration was in charge of developing the concept and implementing it.

• Various voluntary actors have contributed throughout the entire planning phase.

• Two workrooms have been equipped with a total of 24 workstations.

• A separate meeting room offers space for 8-10 people and is equipped with a smartboard and state-of-the-art video conferencing technology.

• A kitchenette and a multifunction printer are available to all users.

• A software package for the administration (booking, accounting, statistical analyses) of the co-working space was purchased.

• A broadband connection to the internet was installed.