A community building serving as a multifunctional digital hub, which provides broadband internet connection, a range of rooms and spaces and support services for individuals or companies in the area.

This digital community space is a form of Third Place (Tiers Lieu) which is defined as being separate from the home (‘first place) and work (‘second place’) – other examples can include churches, cafes and barbers shops. In this specific form, it includes private and shared offices, co-working rooms, spaces where seminars, conferences or training events can be organised, and other facilities such as a relaxation room.

As well as the physical infrastructure, the digital third place should be the location for the provision of much needed support services for the implantation of new citizens or companies in the area. All these services are a way to transform the village into a more attractive location to both live and work for companies and citizens, helping to reverse cycles of decline.

The digital third place is a great solution to be built and implemented through citizen participation and public-private partnership.

“Le Jardin” is a smart solution since it helps to tackle the rural area’s depopulation issue through digital solutions and the creation of a resource centre. The multiplication of opportunities offered by the creation of “Le Jardin” ensures the village development.

“Le Jardin” was developed through a strong public-private partnership which ensures the dynamic and the sustainability of the initiatives.

Business innovation as the third place implies a 350m2 space for co-workers, open 24/7, a meeting room, a kitchen and veranda with the management of the co-workers’ community, the welcoming of training, conferences, computer support, technical support… and a lot of flexibility with a “nomad” pricing for co-workers (half-day, full day, 5 days). 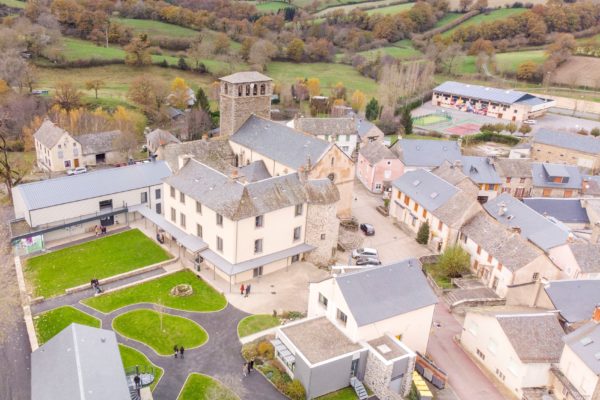 Arvieu is a mountainous rural village with 800 inhabitants. Located at 30km from Rodez (23000 inhabitants), this area is suffering from depopulation due to its location and the lack of opportunities. In the digital age, the lack of broadband connection has contributed to the departure of young workers going to cities and then, to a reduction of local activities and a lack of the village’s attractiveness.

Laëtis is a cooperative and participatory association specialised in website creation and digital, which was set up in collaboration with a large number of partners in 1998. Laëtis developed Le Jardin thanks to a public-private partnership together with:

“Le Jardin d’Arvieu” is the result of the dynamic created by the cooperative Laëtis since its installation in Arvieu, in 1998. As the village and the company were suffering from isolation and depopulation, Laëtis and its founders started to think about how to make Arvieu a digital and attractive village.

Through this public-private partnership model developed throughout the process, the village of Arvieu developed a real community-focused place in “Le Jardin”.

The digital third place can make an important contribution to answering the demographic crisis of the area by:

Arvieu now benefits from a high recognition at the local level but also at the national level as it is part of a French third-place network and of “Fabrique de Territoire” (an initiative to encourage the implementation of third places in France) since October 2020.

The initial investment of 960 000 euros was needed for renovation of the convent, development of the different activities related to “Le Jardin”…

• One person to develop the cultural animation of the village

• A space for exhibitions, events or conferences (for public information, cultural events)