Rehabilitating former railway infrastructure to create a network of hiking and cycling trails.

The green railways initiative renovates and adapts disused railway lines to make them usable by the general public as hiking and cycling routes.

This includes work to ensure that the ground is clear of obstacles, including physical objects (e.g. leftover railway infrastructure) or overgrowing vegetation to ensure it is passable by people walking, cycling or – in winter – cross-country skiing.

It also involves the installation of wooden bridges and railings, as well as route markings along the path to make the former tracks suitable and safe for non-motorised traffic of different kinds.

The basic infrastructure of the routes is complemented by the creation of recreation areas and installation of rest benches and improvement of former railway infrastructure facilities along the path to provide areas to rest and enjoy. The solution also includes the installation of pedestrian and bicycle meters, which count the number of railway visitors.

The solution is smart because 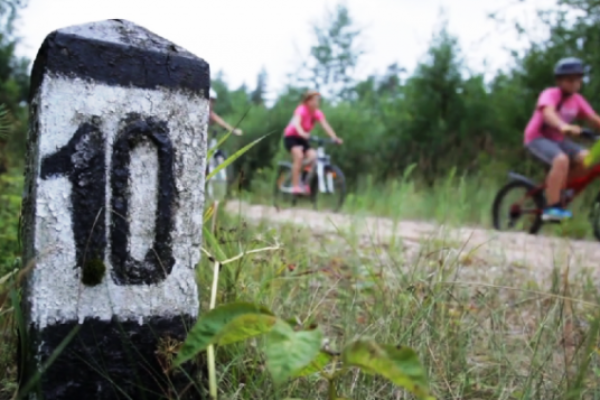 The municipality of Valmiera covers an area of nearly 3 000 square kilometres in the northwestern part of the Vidzeme region in northern Latvia, on the border with Estonia. The municipal capital is 107 km from the capital city Riga.

Historically, the economic development of the settlement was facilitated by its location on the trade routes of Pskov and Terbata-Novgorod and in the 14th-16th centuries Valmiera was part of the Hanseatic League.

The railway line Ainaži—Valmiera—Smiltene was a 114 km long 750 mm narrow-gauge railway line that connected the port of Ainaži with Valmiera station and continued to Smiltene. It was originally used in particular to transport freight including firewood, stones, coal, artificial manure, butter and potatoes. In 1928, there was built a special motorcar for passenger transportation. However, many railway facilities were damaged in the second world war and afterwards, the range of transported goods narrowed and passengers increasingly used bus services.

From 1970 to 2000, the railway line was gradually eliminated in stages as it was taken over by a foreign company which did not find the rail operations profitable. The Valmiera-Smiltene section of rail was closed in 1970, the Ainaži-Pāle section in 1977, the Staicele-Pāle-Puikule section and the Dauguli-Valmiera section in 1979 and the last section Puikule-Dauguli was closed in 2000, when it stopped being used by the Zilākalnas peat factory. The rails and metal bridges were dismantled and removed for scrap metal

Despite its abandonment, there is still a generation living in the area that experienced a time when the narrow-gauge railway was running in the local area and they have memories and sadness at the same time,

Most of the railway embankment had become privately owned and, in many places, the railway line had started to become overgrown with vegetation.