The interactive story map is a village walking map on which information and stories from the village can be listened to with QR codes.

The solution involves the production of a paper map, which provides a series of QR codes linked to specific locations in the village. Users can follow the map to specific locations within the village and scan the relevant QR code using a smartphone to listen to someone tell a local story related to that place. Stories are collected and told by local residents with help from professional editors and narrators.

The solution uses the potential of modern digital technologies to provide the possibility to receive a guided tour of the village from a host of local voices whenever the user chooses. It recreates the value of the original physical event in a resource efficient way

The solution is also smart because it builds on the existing people and cultural heritage of the village to support social cohesion and make the village more accessible and welcoming to newcomers. Without encounters, there is no society. The ‘small meeting’ is essential and the village story map is a very accessible tool that supports this in a simple and effective way. 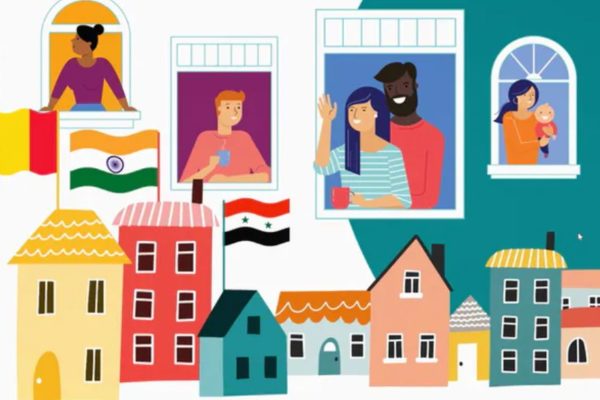 Schendelbeke is a village of under 2000 inhabitants in the south-east part of the rural Flemish Ardennes region, about 35 km west of Brussels and benefitting from a train station.

In recent decades, the village has experienced: a reduced amount of agricultural activity, agricultural land and farmers; loss of open space due to the expansion of the industrial area and of private housing; and the centralisation of services in the nearby city centre, to the detriment of services available in the village in general, and of shops and cafés in particular. The village school survives for the moment, but its closure is imminent.

Through a variety of local initiatives, the council strives for more social contacts and a stronger commitment of inhabitants to village affairs. The village council has achieved the renewal of the ‘community centre’. The creation of a communal garden is the next aim and they are collaborating on a larger environmental plan with provincial and city administrations.

An additional  housing stock of about 200 units is expected 2020-2021, of which 141 social housing (SHV Denderstreek). In addition, in Schendelbeke as a station village, the regulations for high-rise buildings in the village center became more flexible. This will also have consequences for new construction and the influx of inhabitants in the village.

Avansa Vlaamse Ardennen-Dender vzw is one of 13 ‘socio-cultural organisations operating in a specific region’ in Flanders and Brussels. It strives for a sustainable, inclusive and democratic society based on principles of solidarity, through a broad range of learning practices for adults.

Avansa guided the village council in thinking about how to welcome new residents to the village as part of a broader process, of which the village story map was one of the outputs.

The initiative came as part of a project that revolved around dynamic villages. Avansa guided the village council in welcoming the new residents. In the first phase, it was investigated how new inhabitants participate in a village. De “Ruiterij” and “Hovendaal” in Michelbeke (located in the municipality of Brakel) are two examples of places where new residents are concentrated. They acted as case studies. The research was supervised by Ruth Soenen, author of  “het kleine ontmoeten”. (“the tiny meetings”)

In a second phase, Avansa examined -together with residents united in a village council-  how the village will evolve and how it can deal with the new residents. The Schendelbeke village council was partner in this phase.

A first meeting of the 'new residents working group' invited some new residents to talk about how it is moving to Schendelbeke, how the village council is perceived, how they felt about the idea of a personal welcome etc.

Three agreements were made:

A second action was prepared: a ‘village walk’. Since this used to be a yearly activity organised by the village council, it could be set up without much extra or unusual effort in the rather loaded agenda of this group of volunteers. The idea was to include new inhabitants in this ‘village walk’. This would enable them to discover hidden beautiful places and roads in the village.  On certain points on the map,  storytellers would tell historical anecdotes, folktales or memories of people who had lived there, or plans for the future. In that way, the walk was not only a factual or geographical introduction, but also a social one.

Later on, the idea grew to include the stories that were shared during the physical event and link them to a walking map with a QR code. So that other people in the future could also take the walk and enjoy the stories and get to know the village.

Collecting the stories was planned through a process of bringing people together in groups and literally 'mapping' where their personal stories were located, where their activities, and good and bad memories are situated. However, Covid prevented many group gatherings and restricted this phase to individual meetings -mostly walking in open air which, in itself, proved to be a very productive and dynamic way of sharing information about the village. In the meantime, walking was increasingly rediscovered during the corona pandemic as a low-threshold family activity. So, in the end, corona made us discover new opportunities.

Based on personal stories and interviews, locations were selected and an overview of the stories was made.

An offer was made for coaching of narrators, for making the sound recordings and design and realisation of the hiking map.

The stories were partly written by residents of Schendelbeke and partly told by professional narrators.

Once produced in June 2021, the story walking map was presented by the village council and given to new residents as a welcome gift. The map was also distributed around the village. Visitors can obtain the map in the local tourist information office.

Whilst the map is brand new at the time of writing, the first reactions have been very positive. Newcomers get to know the village much better. It is an instrument to inform them without obligation and to explore their environment at their own pace, with the figures and the stories behind them. Also, existing residents appreciate having their stories heard.

Planning the walk along safe, and where possible slow roads, was an added value.

The village story map aims to support the integration of newcomers into the village and village life. It thus hopes to improve social relations within the village and make it a more appealing place to live, attracting new families.

The hope is also that this map will get people walking through their village and bring them into contact with others through casual and spontaneous interactions between newcomers, visitors and residents – providing a further impetus to increased social cohesion and the possibility to stimulate additional community activity.

No ongoing costs, except perhaps for an updated future edition.

• A steering committee or village council to bring people together and collect stories of the village.

There is, in fact, practically no need for physical infrastructure for the preparation of the story map. In the phase of recording, professional equipment is needed, but this can be set up in a mobile studio.

The village council covered the costs of a festive live event where the map was launched (receiving support from the local city council).