Ride-sharing benches are equipped with signs of destinations that local people can hold up in order to get a free ride from a passing vehicle heading in the same direction.

The principle of this community-led local transport concept is quite simple: the ride-sharing benches are located in highly visible public spaces. Signs with possible destinations are attached to them. If someone wants a ride, they simply hold up the sign with their desired destination and can then get a ride from a vehicle that stops at the bench and is heading in the same direction. If the destination is not on the signs, ride seekers can also make their own. If someone waiting doesn’t want to take a ride with the person who is stopping, they can politely tell them that they are waiting for someone they know.

A cheap, local mobility concept, ride-sharing benches are a simple smart solution that respond directly to the challenge of sparse, underfunded public transportation services in many rural areas based on a form of social innovation.

The ride-sharing benches deliver a self-organised concept of mobility, which conforms neither to the logic of the private, market-based economy, nor to the public, state-based economy. Instead, they can be understood as commons, a concept described by U.S. Nobel laureate Elinor Ostrom. as a social practice of self-management of a resource by a community of users rather than by the state or the market.

The social impact of the concept should not be underestimated offering the following advantages:

Ecologically, the concept is smart because it avoids the waste associated with having under-occupied cars driving around with higher CO2 emissions per person. The fact that less individual journeys results in less traffic and less noise is also a positive effect of the ride-sharing benches. 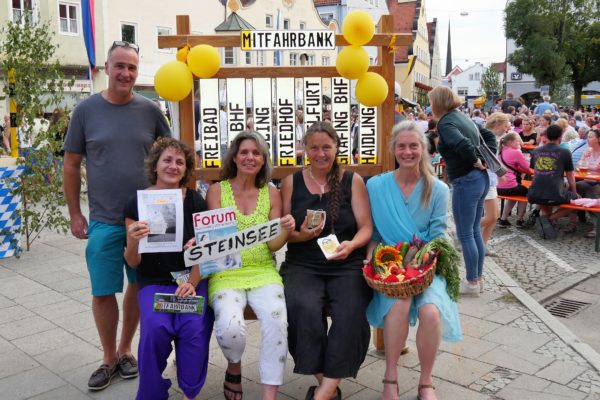 Grafing is located in the Upper Bavarian foothills of the Alps, about 32 km southeast of Munich, currently with about 13,800 inhabitants. The town is located in the district of Ebersberg, in one of the economically strongest districts of the Munich area. Grafing has several schools, sports clubs, churches, monuments, shopping facilities, service providers and a wide range of cultural activities such as festivities and events.

Grafing's charming location is characterised by a valley open to the south and the hilly terminal moraine landscape in the surrounding area.  Grafing offers hiking and nature lovers many opportunities for a wide variety of activities. Meanwhile a well-developed network of bike paths in and around Grafing as well as in the whole region east of Munich is perfectly suited for small and larger tours.

Also good road and rail connections make Grafing an attractive city for day trips to the nearby alpine region, to the "Bavarian Sea" the Chiemsee, to Salzburg or to the many sights in the southeast Bavarian region.

The Transition Town Initiative Grafing is constantly looking for new ways to make citizens' everyday lives more environmentally friendly through sustainable, local solutions. The area of mobility is a major contributor to climate change. It is against this background that the idea of ride-sharing benches was born.

The initiators of the project are the Grafinger Transition Town Initiative. In the spirit of the international Transition movement, it is their wish to organise life locally in such a way that present and future generations can live well, in which Grafing becomes a place that can "take care of itself" better in times of climate change and shortage of cheap oil, and where people enjoy living.

The ride-sharing benches initiative is moreover supported by the city administration, the sponsors, the producers, the carpool bench sponsors, and of course by all citizens who use the benches.

One of the most important challenges in the implementation process is the acceptance of the population. Some citizens expressed their concerns about the safety of the mobility concept. Various measures have been proposed to increase the safety of the ride.  First of all, it is pointed out that car drivers are not obliged  to take waiting people, nor are waiting people obliged to get into stopping cars. In addition to encouraging each person to decide for themself whether they want to facilitate or take a ride other precautions are suggested.  For example, rideshare passengers can ask the driver before the ride if they can take a photo of the license plate and then send it to a close person. A less digitalised solution with a similar effect are stickers that regular drivers can put on their cars.

Promotion: Other costs are also incurred in the area of advertising, however this can obviously vary from case to case. This can include publicising the benches at various events or producing content (short films, flyers, website etc.) for the presentation of the project.

Note also that, before the project got underway and also during its implementation, many working hours went into its conceptualisation.

Initial/set-up costs for the physical infrastructure associated with 6 benches: 6000€. The 1000€ per bench is made up of the following costs:

• Volunteers of the local Transition Town initiative, which developed the alternative local transport concept with about 4-8 people and engaged the municipal authorities

• A carpenter or other local producer of the required benches and signs.

• Municipal works teams needed for installation and maintenance of the benches.

• Locations where the benches are located with good: visibility, stop options, and possibility of anchoring the benches in the ground