Installation of a scattered network of solar panels on roofs and terraces within a village through a community-led process.

The solution involves the purchase and installation of solar panels and inverters on a network of private roofs and terraces through a community-driven process. Homeowners are thus able to harness solar energy, use a part of that energy in their own home and pool the surplus energy in order to sell it on the local market on behalf of the community.

Through community organisation, the village is able to bulk purchase the necessary equipment, arrange a bank loan to cover initial investment costs and use the profits from the sale of the surplus energy for community projects.

The solution is smart because it combines new technologies with social innovation in order to deliver economic, social and environmental benefits for the village.

It demonstrates social innovation through the creation of a community cooperative to establish the solar network with panels bought and installed at relatively low cost through the collaborative approach. The initiative involves the local community in managing all aspects of the solution and strengthens local governance, enhancing the potential for additional collaborative initiatives.

It demonstrates technological innovation through the installation of a scattered network of solar panels and inverters on roofs and terraces enabling the collection, use and sale on the local market of clean energy. 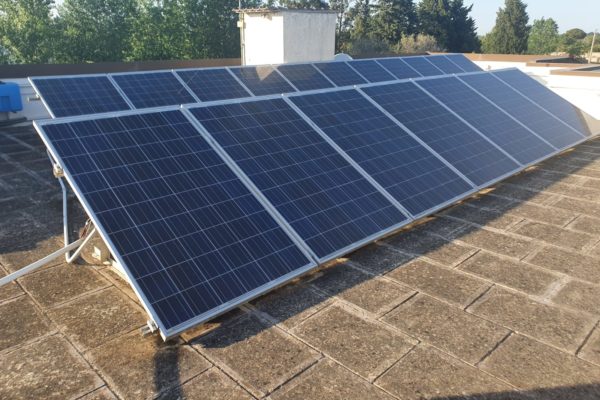 Melpignano is located in the inner area of Salento, in the Apulia region of Italy. The village is experiencing the problems shared by most of the Italian inner areas, such as a lack of attractiveness and depopulation. While in the 1960s the emigration of residents to Germany and Switzerland was considerable, more recently the trend has been that young people have left the village to study and look for better working opportunities in northern Italy, contributing to a sense of economic decline.

At the beginning of the 2000s, large areas of the countryside in Salento, where Melpignano is located, which were previously used for olive groves were turned over for the installation of solar panels on the ground. Even though the production of clean energy created relevant profits for the landowners and to national and international companies investing there, the lands used for solar plants were progressively turned into a desert, with negative effects on the landscape and the environment.

Nevertheless, the village has a long tradition of collaborative governance, with a strong sense of community and civic engagement by the residents, which led to attempts to tackle challenges faced by the village collaboratively.

The Municipality of Melpignano is the main driver of the solution, which was then implemented by the Melpignano Community Cooperative which operates in an autonomous way and has its own governance bodies.

Currently, the cooperative has 300 members and carries out a wide range of projects in different fields (including also culture and inclusion). The model of community cooperative created in Melpignano was then replicated by other municipalities in Italy and inspired the creation of a regional law in Apulia (recognising community cooperatives as being ones having 10% of the residents as members in towns with less than 5000 inhabitants).

The solution provides financial, social and environmental benefits which can support the long-term sustainable development of the village, in particular through:

• Creation of the technical project, installation, maintenance and cleaning of the solar panels

• Registration costs for the creation of the Community Cooperative

• Management of the Community Cooperative

• Monitoring, maintenance and cleaning of the solar panels

• Electrician and metalworkers services for the installation of the solar panels

• Staff for the management of the Cooperative

• Board of Directors overseeing the ordinary management of the project

• Support base for installing the solar panels and the inverter