A 10-day residency for 80 participants from different creative and professional backgrounds, focused on exploring ways to revive village identity and local territorial development.

Transluoghi is a concept from Morigerati, a rural (mountain) municipality located in south-western Italy, which involves bringing together 15-20 local inhabitants with 35-45 ‘external’ participants for a 10-day creative residency. Together, they explore local needs and develop small joint projects to inspire and promote local rural development based on arts, culture, agriculture and tourism.

External participants are mainly artists, creatives, researchers and architects. They are accompanied by around 20-25 members of a core organising team (staff+ tutors).

Starting from the assessment of residents’ needs through the organisation of tours guided by the residents and design thinking laboratories, ‘Transluoghi’ engages participants in a series of cultural and artistic workshops to explore practical solutions to some of the most interesting challenges of the rural community and territory, such as raising village attractiveness, tackling depopulation, addressing lack of trust, promoting social cohesion, supporting local enterprises and creating a local brand identity and strategy.

In its four editions so far, Transluoghi has produced some concrete effects in Morigerati and on its local business system, including the regeneration of public spaces with the installation of artworks co-produced by residents and participants, producing new equipment following the indications of business owners and reviving the local countryside festival. Film and documentaries produced in the framework of Transluoghi are used by public institutions and private actors as promotional materials for the village.

A social innovation initiative, this solution harnesses both local and external energies, perspectives and expertise on local rural development opportunities and potential. It has also created a new climate of trust among people, contributing to solving conflicts and reviving social cohesion.

This scheme, developed by a multidisciplinary team in an NGO taps into the skills and competences of a broad range of artists, creatives, researchers and other professionals who make up the external and village participants. This includes digital and technological skills, which are provided for the benefit of the local community. 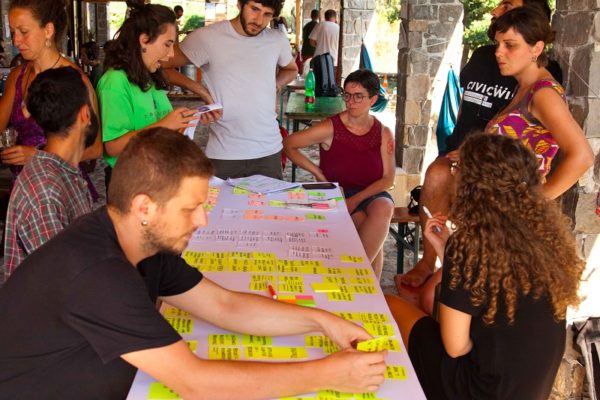 Morigerati is one of the few villages of Cilento area which started in the early 2000s a series of active policies for sustainable tourism and to host visitors in an innovative way. Thanks to the presence of a natural reserve protected by WWF, Morigerati was one of the few villages of the area which fostered an active relation with rural farms and involved them in a new storytelling of the village, promoting typical products and the assets of the village in a collaborative way.

The main challenges of Morigerati are the contrast to depopulation, which was focused by Transluoghi through the active involvement of different categories of residents (such as local youth and elderly persons) along the year and supporting the creation of new opportunities for them.

Implementing skills of local business and innovators in digitalisation and territorial marketing is another relevant challenge of Morigerati, which was addressed by Transluoghi promoting the empowerement of local stakeholders and a stronger coordination among SMEs for the creation of a solid and integrated offer in terms of tourism and local products.

The platform for bottom-up urban regeneration Recollocal is the main organisation behind the smart solution, developed in collaboration with other NGOs and organisations based in Morigerati and in other Italian regions (often driven by participants or trainers of the first editions of Transluoghi). Recollocal is composed by architects, cultural activists and experts of communication.

The main challenge was to overcome a cultural deficit on how to well structure public-private and private-private relations at local level. These obstacles were overcome through an action of listening and reinterpretation of local needs and the management of conflicts with new tools, often linked to artistic and cultural practices.

The most difficult aspect in implementing the smart solution was to foster the collaboration with local actors through meetings aimed to convince them about all the aspects of the project and the benefits for the local community, overcoming personal resistances and scepticism. For instance, one architect objected to any temporary changes to his structure. However, he was included in the team, giving him the opportunity to lead some activities within Transluoghi. In another case, a local museum refused to be involved because they didn’t agree on the format and on the objectives of the event.

A recurrent problem is connected to the funding of the event and to ensure a financial sustainability to Transluoghi, whose realisation is mainly based on volunteer work. The organisers applied for regional and national funds but without success.

Promoting an active collaboration among neighbouring municipalities was also a challenge, that needs to be faced with an overall territorial planning on medium and long term.

A main premises for the event: a public structure used as a camping and event location

Two structures for trainings: a social centre and the basement floor of a local hostel

Wood and metal material for new constructions and related equipment