A resident-led process of taking desolate/abandoned rural housing and upcycling it into new houses in suitable village locations.

The solution is a resident and volunteer-led process of identifying and then deconstructing desolate and abandoned houses in the local area in order to provide traditional local materials for the construction of new, modern houses in appropriate village locations. The solution includes the engagement of an architect to design houses making use of the traditional materials in harmony with the local area. Whilst the deconstruction and transporting of materials is organised centrally with local volunteers, the eventual construction costs are covered by new buyers.

The solution is smart because it uses scarce resources wisely to create new opportunities to change the village’s future development perspectives.

The solution demonstrates the following forms of innovation:

Praise, pride and believing in the bright future are forces behind this project. 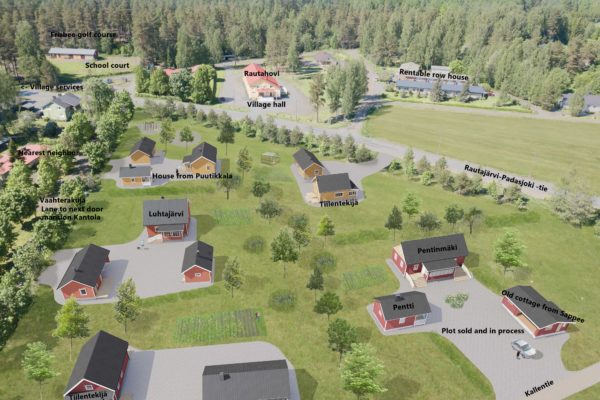 Rautajärvi is located in the Pirkanmaa region of southern Finland (capital city Tampere). Until the 1960s, it used to be the biggest village in the Luopioinen municipality, largely due agriculture and forestry. However, it has seen a steady decline in population ever since. In the period 2013-2018 alone it lost 9% of its registered inhabitants.

Nearly every year, the municipality has suggested closing the village school, library, service centres, daycares, units in old people’s home and health centre. Rautajärvi faces a continual struggle to keep its vital services running – often taking a lot of effort and volunteer workers. Nevertheless, the full day care was closed in May 2020 and Rautajärvi will lose its villlage school in summer 2021. Residents in the area increasingly travel to use services in the bigger population centres where supermarkets are.

Land ownership in Rautajärvi village was divided from just two large farms into 120 farms between 1927 and 1947 due to three big land reforms. There are a lot of old farmhouses vacant in the village mostly because owners have built a new house next to it or live away but won’t give up the old family home. Those houses are nearly all made of logs. In 2008-2009 and 2019, villagers asked if unused houses could be rented or sold, but only a couple of owners were willing to do that. In a lot of the houses, the only resident is more than 75 years old and soon there will be many old houses vacant. Unfortunately, old houses that have not been maintained and modernised are not popular among young people. The supply and potential demand for housing does not match.

Back in 2016, the village finished a village zoning plan in which it was found that there are many desolate old houses in and around the local villages. This plan identified plots to sell and infrastructure around the plots belonging to Pälkäne municipality.

Rautajärvi took part in a collaborative project of LAGs in Pirkanmaa region called ‘Finnish villages sequestering and storing carbon’ and started to think about possible solutions for how to combine the attempts to solve many of our problems in the future, including: a) mitigating climate change in rural Finland; b) taking care of our deteriorating built environment; and c) turning around the local population decline.

Towards the end of 2019, the idea was formed to meet the various needs through a project to recycle desolate log houses, involving a circular, environmentally friendly approach to constructing new housing to meet the needs of potential residents.

At the start of 2020, the village made two funding applications: one to a local bank foundation; and the other to LAG Pirkan Helmi. Both applications were successful and work started in April 2020 to search for  desolate old log houses where the owners would allow them to be deconstructed and the materials re‑used to build a new house for free.

The bank foundation ‘Luopioisten säästöpankkisäätiö’ funded the work of a young architect from Tampere University to design 5 houses out of found houses and the basic plan was finalised in October 2020. All houses have two rooms, a sauna and a garage as well as large 3000+ gardens (at least 3000 m2) with plots where the growing of vegetables, herbs and fruit trees is encouraged.

The deconstruction of the first house took place in June 2020, with the second and third taking place in October and November 2020. Volunteers were engaged for the work of taking down the existing housing.

Volunteer work days take place nearly every Saturday and the social enterprise is teaching how to make biochar from the demolition waste and making biochar better known. Biochar is charcoal that is produced by pyrolysis of biomass, in the absence of oxygen, and is used as a soil ameliorant for both carbon sequestration and soil health benefits.

The construction of the new houses is paid for by the new owners, so a key step is to find potential buyers who will pay to build the new house.

In late 2020 the first building permits were requested.

The village has also started to form a village brand based on the principles of sustainable, communal and resilient rural lifestyles.

As part of a more comprehensive strategy, there are also five additional and complementary housing initiatives either completed or under way in the village, both with new and old housing:

The main costs related to this set up are:

In addition, the construction of each house is at the charge of the new owners.

Ongoing costs: 0€: Once the houses are built all subsequent costs are for the property owners.

Volunteers or social enterprise workers to carry out key coordination tasks such as:

• Supporting the building of new houses

• Marketing the initiatives, the houses and the village

Architects/designers to plan the new builds

Experts in the production of biochar to train others

• Sites where to build