Hosting cinema screenings and before-and-after social activities in the village library – or other municipal building.

Film screenings can be organised in collaboration with the local community to select both the films and the dates on which they are to be shown, and adapted to suit both younger and adult audiences.

One of the main aims of the cinema screenings is community building, so additional programme of activities is usually organised before and/or after showing the film. This often includes tea, coffee & snacks, talks by invited speakers (linked to the theme of the film) or discussions after the screening on what was seen in order to generate interaction and connections between local residents.  Cinema screenings can also be used to communicate and/or discuss other community news or initiatives.

Specific screenings for children should be accompanied by games and learning activities and can be organised together with any local schools.

The solution is smart because it demonstrates a form of social innovation, ensuring the cost-effective provision of a cultural service that would not otherwise be available to the local rural community. It thus encourages social connections and community building which can offset problems of loneliness and isolation within the community and also trigger further community activities.

It also provides opportunities for additional activities with educational or health benefits as well as for citizen engagement in other local initiatives – through activities carried out alongside the screenings. 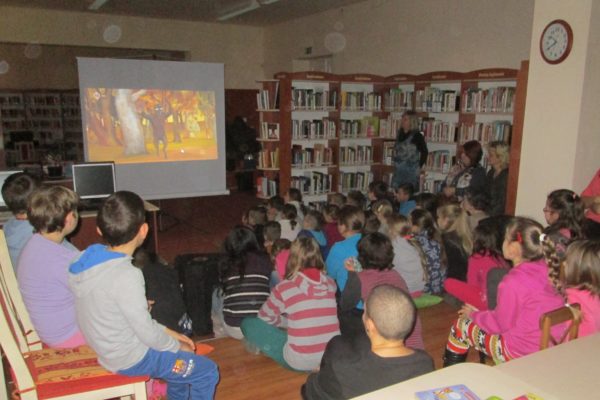 Katymár is a settlement in South-Hungary, with 1690 inhabitants. The village lies directly at the border of Serbia, only 50 km away from Croatia, and has a significant Croatian minority (8.9 % based on the census in 2011).

Comparing to other similar sized villages in Hungary, the settlement is rich in basic services, i.e. has a kindergarten, primary school, library, social home, public kitchen, post office, doctor, pharmacy, groceries, every Thursday a market, hairdresser, playground, and room for rent as accommodation. The village is home to 8 civic associations (in the field of: hunting, fishing, sports, culture, firefighting and civil guard).

However, the village had very limited cultural and other leisure offerings, i.e. only a pub, a football field, a fishing lake and a community centre where they can organise events, and had no cinema until 2015. Increasingly, people in Katymár got together less and less often. After work, usually television is the only or the easiest way to relax, which in turn causes separation in the community.

The settlement is relatively remote, there is no good infrastructure and is far from bigger cities. It was once connected to the railway network, but was discontinued in 1960 and the track was picked up. The nearest town is Baja with 35,000 inhabitants, which is 30 km away, i.e. about 30 minutes by car. While, the county seat, Kecskemét (110,000 inhabitants) is 125 km away, which means a little less than 2 hours by car. There is a relatively good connection with the nearby cities by public bus. During weekdays, during the day, there is on average a public bus in each hour.

The inspiration came from Mária Ramháb, the director of the county library (Bács-Kiskun József Katona County Library) who has personal connections to the settlement.

The mayor of the village and the local librarian saw the opportunity in her ideas and started the planning of the complex development.

Implementation of the initiative locally was also tied in with a national Library Cinema initiative launched by  the National Informatics and Library Association together with Kecskemét Movie Ltd and coordinated at regional level by the Bács-Kiskun József Katona County Library.

In 2010, Katymár modernised its municipal library. An old building of the local school was renovated so that three former classrooms were connected in order to create a single space of 145m2 to house the library and also be adaptable to other community functions. The library was specially designed with easy-to-move furniture. The bookshelves are only against to the walls, whilst the tables and chairs in the middle space can be rearranged in a few movements.

In 2015, Katymár public library was one of the first to connect to a new national Library Cinema initiative in Hungary, which is a national service offered to the libraries of small settlements with a population less than 5,500. Katymár registered on a central service portal and the librarian received a personal code to access and choose from an ever-expanding database on the Library Cinema portal - currently containing more than 750 Hungarian films offered by various Hungarian film studios and copyright organisations - without having to worry about copyrights and licences to project the films. Through this initiative, the screenings can only take place in the library area, it is not allowed to be screened in other places (e.g. the culture centre).

Training was provided to library staff:

On an ongoing basis, there is further regular in-service training to improve the service.

The county library provided the local library in Katymár with the technical equipment necessary for the Library Cinema including a projector and screen.

The local librarian was then responsible for the proper use of the national service and for organising regular cinema screenings locally, with different screenings targeting children, students and the adult population. After each screening, a report with photos must be prepared and uploaded on the national Library Cinema website.

Local residents were consulted on what films they would like to watch from the library cinema database. It was found that, for adults, it is more difficult to agree on a date than for children or students. Several aspects had to be taken into account and it was necessary to find dates which were OK for the majority.

To promote the film screenings among the local community, the local librarian is able to make use of downloadable editable A4 templates to create small posters for noticeboards as part of a ‘marketing toolkit’. The toolkit also includes size A2 posters to be placed in the library and at other community locations, as well as products to promote the library cinema initiative more generally, such as mugs, bags and T-shirts. Facebook is also used.

Screenings aimed at children are organised directly with the local school so that participation is guaranteed (no promotion needed) and all the before and after activities – social and educational – can be organised together with the teachers.

In line with the conditions of the national library cinema initiative, there is no charge for screenings in Katymár and no products are allowed to be sold on site. The hospitality of larger events is supported by the municipality (with tea, biscuits, etc.)

As part of the cinema screenings, the librarian also organises post-screening discussions. These also benefit from specific support from the National Informatics and Library Association, which regularly makes a recommendation, drawing attention to different actualities or interesting topics, and for the kids, they create booklets and provide them to library cinemas for the post-screening sessions. These discussions can be interesting and lively, but it has been found that after a longer film, it is no longer easy to organize a conversation, especially in the winter evenings.

The biggest challenge involved with making the cinema screenings work is getting people out of their homes each time. To encourage this, there is a consistent effort by the librarian to engage the community in selecting films and dates that correspond to their needs and preferences. This key role for the librarian is also a key part of ensuring the continuity of the service within the community.

By the end of 2020, the Katymár Library has held 175 screenings since the first cinema screening on 8 October 2015 (which took place in the framework of the National Library Days).The screenings have targeted different age groups: pre-schoolers, schoolchildren and adults.

The initiative is a great success among the local population, which have now been participating in community events at the library unbroken and enthusiastically for 5 years. There has been a total of 2660 participants, of which 1674 children and 986 adults.

Participants regularly bring cakes, soft drinks and other delicacies to the screening, thus contributing to their community experience and standard of the events.

Today, in addition to its traditional book-lending services, the library’s most important role is in community building and learning support.

Mrs. Istvánné Refle (62 years old): “I like this library cinema programme because we can always watch good movies with our dear acquaintances. That's when I go out with pleasure; I know I will have a nice time. ”

Mónika Vujevity (29 years old): “I love going to the library, I love books and there are even super programmes. I would highlight library cinema, a great opportunity to meet my friends.”

Olivér Tumó (7 years old): "I like to come here because the ladies who work here are very nice and we always watch my favourite tales, after that we stay and play a lot."

Note: Katymár did not have a suitable municipal space at its disposal and needed to build one. Back in 2010, the construction costs associated with creating the library room were: 20,886 EUR.

• Active and engaged librarian (and other library staff)

• A suitable room in a municipal building (in the case of Katymár a library) of minimum 80-100 m2, with easy-to-move furniture