Village in a Box

Local farm products are packaged into one ‘Village in a box’ twice a year and sold to local consumers.

Through central coordination and management, local producers agree to direct a proportion of their production into the creation of a fixed selection of the same local products, packaged into one ‘Village in a box’.

Customers must pre-pay their box of goods. They can pre-order up to 3 months in advance and select whether to have the box delivered to their home (for an additional surcharge) or collect it from a central collection point on a fixed date.

The village in a box can be organised more than once a year – for example a summer box and a winter box.

The solution is smart because it supports short supply chains through coordination and cooperation between local producers, accompanied by local marketing strategies to reach local consumers. In this way, it reduces the gap between producers and consumers at local level, offering healthy local products in a simple easy-to-access package and improving local producers’ access to market.

• Business innovation – it generates local profit and strengthens the viability of the farmers.

• Social innovation – it enhances informally the social ties between producers and consumers resulting in forming a ‘better understanding for each other’.

Overall, the solution improves local resilience by building on the existing assets of local production. 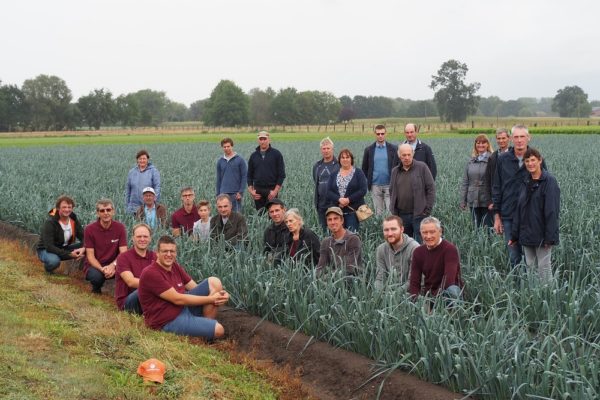 In Schriek, there are around 30 farmers out of a population of 5000. Although they constitute an important component of rural life with more than 60% of the area destined for agriculture, they tend to live a relatively hidden life within the local community.

• One person in the local Rural Guilds group brought forward the idea of ‘Schriek in a box’ and, after several meetings and discussions, the group was convinced to make the effort under the coordination of the initiator.

• The group conducted home visits to local producers. By explaining and asking for cooperation in a kindly manner the farmers could voluntarily engage to put a product in the box. Cooperation between the farmers as such was not a problem and there was high interest in the initiative.

• One of the biggest challenges at the beginning was to guess which quantity was needed. Another was to find and agree a fixed date when a full set of local produce could be packaged and distributed in a way that the produce was as fresh as possible.

• Such issues, along with the overall goal of the initiative, were discussed and explored in three local meetings with local producers so that agreements could be reached.

• It was agreed that the price of the ‘Schriek in a box’ would be € 20. Of this, € 15 was for the producers, and the remainder to cover costs associated with the initiative (the box, printed materials etc.)

• Alongside the coordination of the producers, other tasks included:

• The first winter box was agreed and marketed from 15 September 2020, with distribution on 6 December 2020. Every winter ‘Schriek in a Box’ contained the same 13 local products – e.g. rhubarb - as agreed with the participating local producers

• For reasons of aesthetics, it was decided to add cauliflower to a box (to make a nicer picture). However, because cauliflower was not locally grown, a third party had to deliver it from outside the area. This created difficulties of supply and coordination and did not support the message of the ‘local’ box – so this was a mistake and will not be repeated.

The main costs are associated with:

• Production and printing of the box itself and related marketing materials.

The initiative is self-financing. All related costs are included in the sales price of the ‘village in a box’.

The initiative was also supported by five volunteers in Schriek who carried out the tasks - mainly administrative and communication tasks - without expenses.

Therefore, no seed capital is needed provided a local initiator agrees to take on the coordination role without expenses.

• A visionary person who can enlighten the others

• The action must be seen by stakeholders in this case ‘farmers’ as positive (doable, profitable …

• ‘Content development’ skills during the process (learning by doing)

All what is needed is already in a village:

• a meeting place to prepare the action;

• a spot where people can receive the box.